Every scientist has heard the adage, The plural of anecdote is not “data”.

Anecdotes have scientific value—they can reveal new phenomena before they’ve been systematically studied—but they’re not facts.  They are nonetheless often treated as such, especially if several seem to make a consistent point.*

Trump’s relentless use of anecdotes (what somebody told him about something, like the golfer and voter fraud) suggests that in the modern era, The plural of anecdote isn’t “data”–it’s “alternative facts”.

*Bad use of anecdotes: Koko has had a long run as the gorilla who uses sign language.  Companion-trainer Penny Patterson’s claims initially rested on much-repeated anecdotes such as Koko signing “cookie rock” for a stale piece of cake and “water bird” for swan. (Later they were supplemented by video anecdotes, clips of Koko signing that Penny claimed only she could reliably interpret.)  Even two such anecdotes seem to carry much more weight than one.  Lightning might strike once, but twice? That’s a pattern [not].

Of course, Koko could have been generating creative new expressions in these cases, which made them interesting. However the examples are o 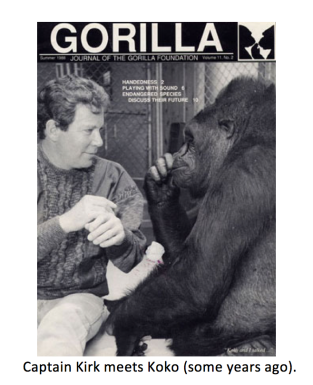 pen to other interpretations, and conclusions can’t be based on a few examples that seem meaningful.  It took other research to determine that the linguistic abilities signing apes were much more limited than such anecdotes implied.

Good use of anecdotes: Studies of brain-injured patients have been a staple of neuropsychological research since the 19th century (and a staple of popular science writing since Oliver Sacks).  Mistaking your wife for a hat is a surprising event, and made for a spectacularly good book title. Damage to the reading system causes patients to make unusual errors in reading aloud, such as the deep dyslexic who read the word sympathy as “orchestra.”  (Ch 9 in my book). Taken in isolation, such errors are just anecdotes, subject to questions about the reliability of the observations and their interpretation.  In the research literature they are often cited in studies that examined the phenomenon systematically, looking at multiple patients or repeated assessments of the same patient, the mechanisms that underlie the error, how often they occur in other populations, and other questions. The anecdote isn’t the data, but it helps in illustrating the phenomenon under study.

One thought on “The plural of “anecdote” is …”